Twenty-four years ago my teacher Washio-sensei founded a yearly exhibition of martial arts called the Shun-Shin-Kai (春心会, or “Heart of Spring Association”), held at the Noh stage of Tokyo’s Yasukuni Shrine, one of the major Shintō shrines in the country. While the shrine itself is the focus of a good deal of controversy (those enshrined there include some convicted of war crimes during the Second World War, which causes a great deal of indignation when high-ranking officials such as the prime minister pay their respects there, especially among the leaderships of other Asian nations that suffered under Japanese rule before and during the war), our Association takes the name of the shrine at face value (“Yasukuni” 靖国 means “peaceful country”), and use the opportunity to both welcome the return of spring and pray for the continued peace of the country.

This year’s exhibition was March 17th; we were fortunate in that the weather cooperated, and had mild, indeed spring-like weather, and even a few early sakura (桜: Japanese cherry) blossoms. The atmosphere of the shrine is very conducive to a feeling of gravity and connectedness to tradition, so it is always a deeply compelling experience to participate in the event.  This was my first time to perform iai in public wearing the formal montsuki, a kimono top usually bearing the wearer’s family crest, but in my case this time the mon (紋、crest) of our dojo.  I also participated in an exhibition of Miyamoto Musashi’s Ni Ten Ichi Ryū style of swordsmanship. 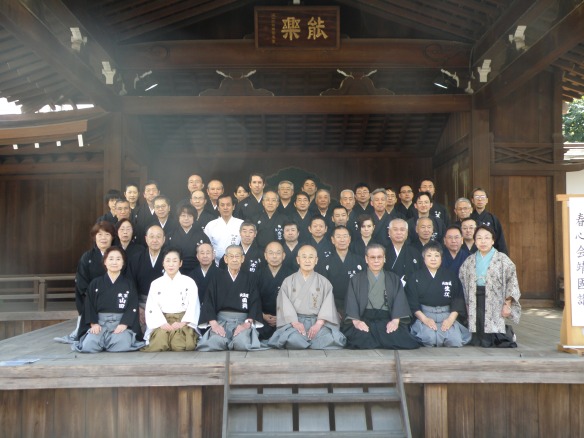 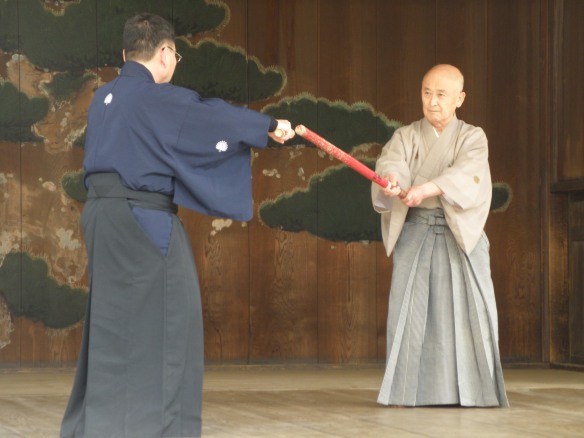